The Byurakan Observatory after V. Hambardzoumyan, located at an elevation of 1500 m above sea level, on the slope of Aragats Mount, is among the largest astronomical centres of the world. The most daring and interesting scientific theses on the birth of galaxies are disseminated to many counties around the globe from here. The studies by the Byurakan School established by Hambardzournyao have left a significant impact on the development of contemporary astrophysics.
In 1946, the observatory was founded and managed by the world-famous scientist, the RA National Hero, Academician Victor Hambardzoumyan (1908-1996). He was the founder of the Soviet school of theoretical astrophysics, the President of the Astronomers Union and starting from 1968 President (the only Soviet scientist) of the International Council of Scientific Societies uniting the academies of the sciences of 60 countries and 15 associations. In 1970, in breach of the organization’s charter, he was reelected to this post for the second term of office. He was also a member, honorary academician and doctor of the International Astronomical Academy, national, royal societies and universities of many countries. In Armenia the birthday of the scientist – 18 September – has always been celebrated as the Day of Astronomy. The year 2008 was declared as the Year of Victor Hambadzoumyan’s by the UNESCO.
As the ‘Zeus of Astrophysics,’ a ‘Copernican Revolutionary’ and ‘Red super giant’ (a star by thousand times exceeding the sun), Hambardzoumyan shines in the heaven of science. He proved that neither stars nor planets are created once and for all but emerge and develop on a. continuous basis. In 1947, he discovered extraordinary and unique groups of stars in our Galaxy, which the scientist named associations. ‘Today, no astronomer would deny that the galaxy nucleus is shrouded in mystery, and the first person who comprehended the richness of this treasury was Victor Hambardzoumyan’ (A- Sandage, USA). ‘I have stopped wondering what makes Hambardzoumyan’s hypotheses, made many years ago, be confirmed one after the other’ (J. Oort, Holland) and ‘I am delighted with the incessant, highly outstanding and brilliant achievements of Professor Hambardzoumyan in astrophysics in the last 50 years’ (Chandra-sekhar, USA). ‘Only a few are capable of attaining the heights of that science and of giving new truths to the world. Victor Hamazaspovich Hambardzoumyan, the greatest astrophysicist of our country, belongs to their number’ (V. Sobolev, USSR).
He read over 900 books per year. He knew Toumanyan, Isahakyan, Charents, Poushkin, Blok and Beliy by heart. He loved reciting and had an excellent memory. He knew seven languages and had a special love for Armenian. The son of the people dispersed like stars was the pride of his nation. On 18 July 1988, there was an extended session of the Presidium of the USSR Supreme Council dedicated to the problem of Karabagh in the background of the bloody genocide in Soumgayit (Azerbaijan, 1988). Hambardzoumyan was also among the participants. Vard-ges Petrosyan tells, *We unanimously decided that if this tough decision was adopted we would put down our delegates’ mandates right in the session hall. Academician V. Hambardzoumyan said that it would be better if he made the statement. “By the right of age only,” he modestly commented. It was not hard for us to understand what a manifestation of courage this was by a great scientist.’ The old academician went on a hunger strike in Moscow for the sake of the protection of the rights of the Armenian people. It is most true that, “had this man lived in the Middle Age, he would have been canonized a saint”.
In 1950, his house was built in the territory of the observatory (architect; S. Safaryan) where the scientist lived till the end of his life. Today it is a museum with the great astronomer’s bronze portrait erected in front of it (sculptor: T. Hakobyan, 2008). The works of the great scientist, his great discoveries brought world renown to Armenia to the scientist himself, to his assistants and to Byurakan.
The Complex of the Observatory (architect: S. Safaryan) is a unique ensemble in a rural environment. The observatory built with the local red tufa and the arched roofs of silvery observation towers stand out against the mountainous landscape. Their arrangement in the plateau is directed to Mount Ararat.
The flowery highway leading to the depths opens from the entrance of the stone wall ending with the main building of the observatory, which completes the whole of the ensemble. Its significance is emphasized by the double towers that are slightly protruding and the high position of the building. The towers give a meaning to the idea of astronomy by their architectural forms. The whole ensemble” projects an impression of a complex that has been conceived and realized in one breath built with a pro-found understanding of the historic surroundings and merged with the architectural monuments in Amberd, Tegher, Ohanavan and Byurakan. The Tegher Monastic Complex is visible from the observatory. 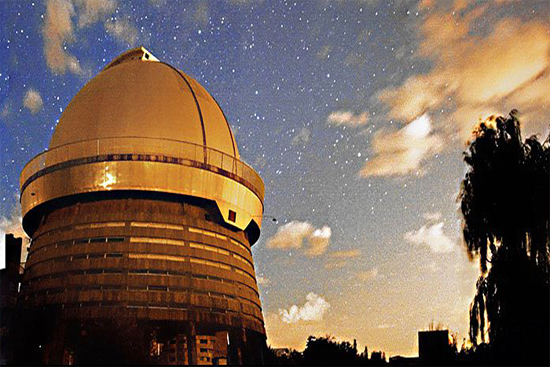 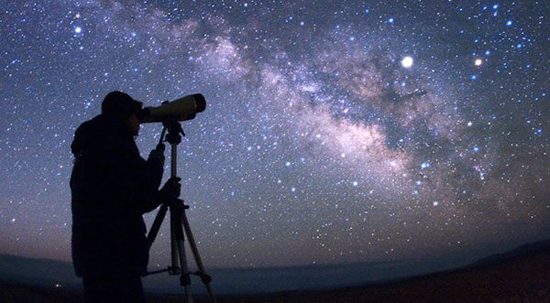 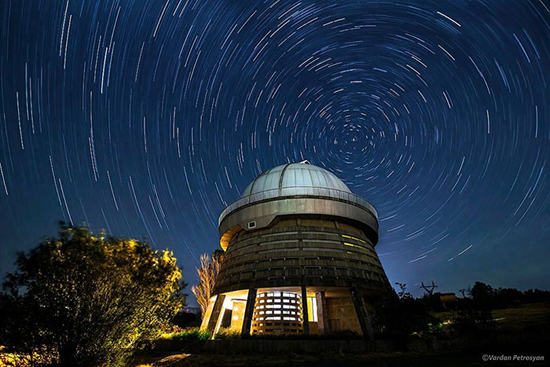 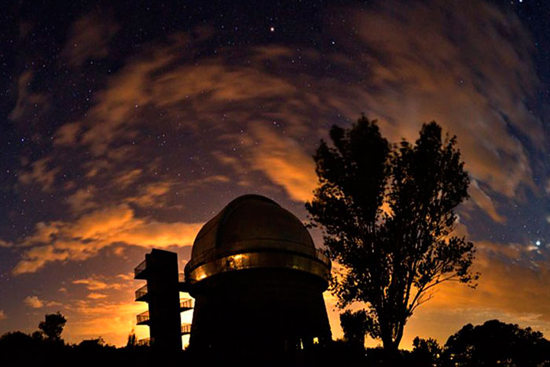 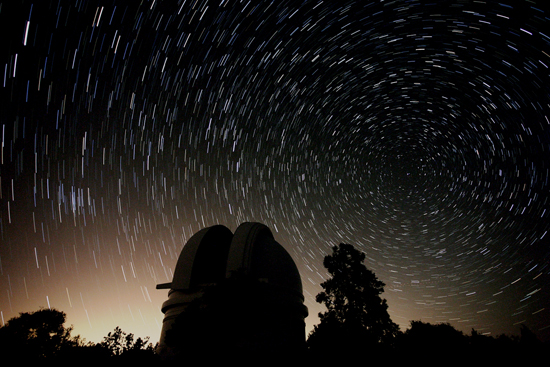