Geghard is one of the most popular monasteries of medieval Armenia, one of the unique cultural monuments. According to the legend, the monastery was founded during the first years of adoption of Christianity as state religion (the beginning of the 4th century).
In the remote past the monastery was called “Ayrivank” (monastery in rock) because of the constructions, dug into the rock; from the XIII century it was also called Geghard in honor of the spear, kept in the monastery (spear, which Jesus Christ was pierced with on the cross). Before that the cherished spear was kept in st. Echmiadzin. Nevertheless, it was moved from Echmiadzin to Ayrivank because of the unstable domestic and foreign politics. Due to the fact, the monastery started to be called “Geghard” as well. The foundation of the monastery is attributed to Gregory the Enlightener. The main church: st. Mary Virgin or “Katighike”, according to the lithographic inscription found on the Western front exit, was built in 1215 (during the reign of Zakaryans). In the 13th century Duke Prosh bought the church from Zakaryans and started the construction of premises in the rocks (under architect Galdzak’s control).
Geghard Monastery was one of the spiritual and cultural centers of medieval Armenia, where besides religious buildings a school, a library, a typography, lots of cells for local monks were established.
Mkhitar Ayrivanetsi (Mkhitar from Ayrivank) and Simeon Ayrivanetsi (Simeon from Ayrivank) lived and worked right here. They had great contribution in the development of calligraphy art. Geghard is popular with wonderful bass-reliefs and exquisite khachqars. The school had a repository of manuscripts. A part of the manuscripts is kept in Yerevan Matnadaran after M. Mashtots. There were lots of attempts to invade the monastery, but it stood inaccessible, and Geghama mountains were its loyal guardians. 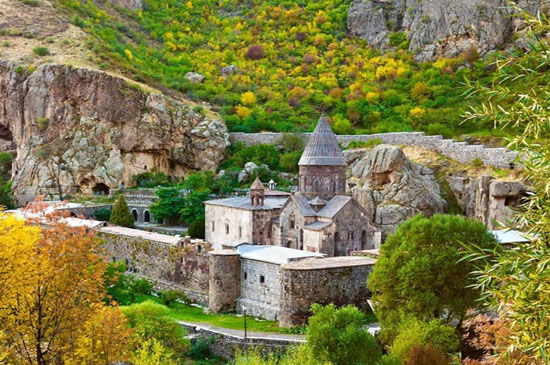 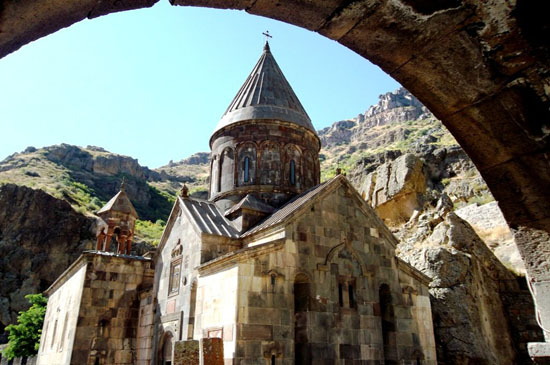